What are the advantages of switching from the old wireless cable TV to LogicTV?

How long does it take to install service in my home?

The inside installation of LogicTV typically takes 2 hours.

What is Video On Demand (VOD)?

What is CatchUp TV and how do I use it?

CatchUp TV in the Video On Demand section, enables you to watch a TV show that you may have missed or forgot to record! It’s like having a DVR in the cloud! Go back 90 days on the US and Canadian networks to catch up on your favourite shows, or start a marathon of your own!

What is Restart TV?

Logic adds additional channels to the HDTV lineup as they become available to us.

Does Logic supply HDMI cables with the HD converters?

Yes! A four to six foot HDMI cable is included. We also have component cables to supply HD signal to your TV if you are unable to use HDMI. If your TV does not have HD capable inputs, standard AV cables will be used.

Yes! Logic has state of the art wireless capable STB’s that we install whenever possible. Due to restrictions in some homes we may not be able to use them at all TV’s. Technicians will determine the best option for your home. Please note, wireless DVR’s are not available.

What brand of Set-Top-Box does Logic offer?

What is Whole-Home DVR?

With WHDVR you can set, manage and play back recordings from any standard set-top-box connected to a television.

How many hours of programming can I store on my DVR?

The total number of recording hours will depend on the mix of SD (standard-definition) or HD (high-definition) programs you have recorded. Our DVR allows you to record up to 145 hours in HD or 450 hours in SD or a combination of the 2.

Do I need to have my DVR/Set-Top-Box connected to a telephone line?

No. Logic’s TV service is an IPTV service delivered over fibre optic cables to an Optical Network Terminal (ONT). The ONT is installed inside or outside of your home.

How many channels can I watch and record at the same time?

LogicTV supports up to 6 Live TV streams to your household. A TV stream can be a live TV show, an On Demand program or a Pay Per View (PPV) event.  If you have 2 or more TVs tuned to the same live TV program, you’ll only be using 1 live TV stream. Also, watching programs that have already been recorded on your PVR doesn’t use a live stream.

Can I watch a show I’m recording before the recording has completed?

Yes. You can either watch the program live as it is being recorded, or you can access the program through the recorded TV menu as it continues to be recorded.

Can I record a TV series?

Yes. From the guide press the record button twice on the remote. A single red dot indicates that a program is being recording. 3 red dots indicate that the series is being recorded. By default, a series recording will record first run and reruns of the program. For more detailed instructions, refer to the Quick Start Guide here.

Can I record On Demand programs?

No. You cannot record On Demand programs.

If I have a home theater will my DVR record a program in Dolby Digital 5.1® surround sound?

A recording may start a minute or more after the program has begun. Why is this?

Your DVR is synced with the TV listing and if a network starts a program earlier than on the program guide the DVR will miss that time unless you program your DVR to record earlier. You can schedule a recording to start earlier and end later than what the guide shows.

Only a part of my program was recorded. Why?

How long can I keep my recordings?

Recorded programs remain in your Recorded TV library until you erase them, or they’re automatically erased to make space for new recordings. You can choose to manually erase a single program or you can erase all the recorded episodes of a series at one time.

Can I erase part of a recorded program?

No. Your DVR can only erase the program in its entirety.

How many future recordings can I schedule?

You can set as many future recordings as you want provided you have the necessary storage capacity.

Do Parental Controls work with my DVR/Set-top box?

Yes. Your Parental Controls will restrict what is viewed or recorded. If you schedule a recording for a program or channel that is blocked the program will record but the video will not appear and the audio will be muted. You will need to disable your parental lock feature to view the program while it is being recorded.

Where do I find the available storage capacity on my DVR? 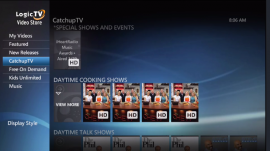 What is CatchupTV and how do I use it?

CatchupTV is a form of Video On Demand (VOD). CatchupTV enables you to watch a TV show that you may have missed or forgot to record! LogicTV records many of the top TV shows available. Go to channel 100 for the Video Storefront. Select ‘CatchUp TV’ and browse the genre you want to view the available titles. 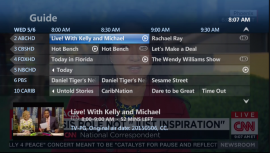 How do I use RestartTV?

RestartTV enabled channels have the circular play button next to it on the Guide. To restart the program currently playing, tune to it, then press INFO and select “Start Over”. The system will automatically go back to the beginning of the program with full Pause/Rewind/Fast Forward functionalities. You do not need a DVR to do this as this is a network based functionality.